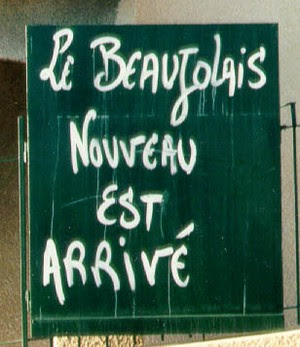 It’s here! The first wines of the season are opened today, starting with the Beaujolais Nouveau.  What? You’ve never heard of Beaujolais Nouveau?  Thought it was just a cheap, crummy wine?  Not so my friends, this annual tasting is a barometer of how the rest of the year will turn out for winemakers. According to the Georges Duboeuf website, "By French Law, Beaujolais Nouveau is always released on the third Thursday of November all over the world” and this year it arrived from France at 12:01 am. Even more importantly though, "The 2009 harvest in Beaujolais is being called the best vintage in 50 years thanks to perfect weather and growing conditions."  This is a good sign for your favorite vintners, and although I haven’t been able to taste it myself just yet, it has to be better than last year’s which honestly, tasted like bananas.

When I was a student in Paris, I participated in my first official Beaujolais Day and have been celebrating it ever since!  There, we were able to drink a bottle of Beaujolais with friends at lunch and then go back to class – tough, I know.  The French revel in the day, and I’ve encouraged my friends to as well.  Unfortunately, getting sick derailed my plans for my own Beaujolais Day party, but don’t worry, I’m sure we’ll have another opportunity to taste this year’s batch.

So don’t stick up your nose at this affordable, young wine. Beaujolais is now linked with Thanksgiving and it would be a perfect treat to bring to your host – start conversation, guess what this year’s wine will be like, and enjoy the holiday!