A Perfect Gratin for a Sunday (and a Tuesday!) 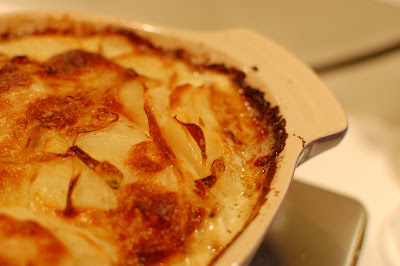 Yesterday was a quintessential New York December day – cold and rainy.  Sam and I wanted something warm and comforting (new, I know) and I was feeling like having more of my new favorite vegetable – fennel!  Ina Garten’s potato and fennel gratin turned out to be just the trick.  Plus, I just received my package of OXO goods for being a finalist on Food52 and I was dying to use my brand new hand-held mandoline.  I think Sam liked it even more than I did!

This gratin is decadent and could probably be just fine with whole milk instead of cream, but hey, it’s the holidays so what’s one more cup of the stuff?  I have a feeling that the gratin will be even better tomorrow when I reheat it as a side dish to pork. 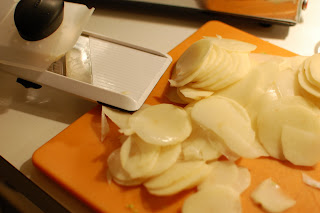 Preheat the oven to 350 degrees F.

Butter the inside of a baking dish.

Remove the stalks from the fennel and cut the bulbs in half lengthwise. Remove the cores and thinly slice the bulbs crosswise, making approximately 4 cups of sliced fennel. Sauté the fennel and onions in the olive oil on medium-low heat for 15 minutes, until tender.

Peel the potatoes, then thinly slice them by hand or with a mandoline. Mix the sliced potatoes in a large bowl with 1 cup of cream, 1 cup of Gruyère, salt, and pepper. Add the sautéed fennel and onion and mix well. 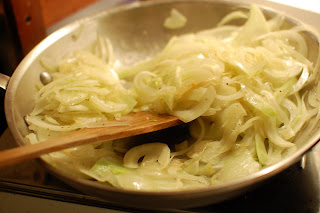 Pour the potatoes into the baking dish. Press down to smooth the potatoes. Combine the remaining 2 tablespoons of cream and ½ cup of Gruyère and sprinkle on the top. Bake for 50 minutes, until the potatoes are very tender and the top is browned and bubbly. Allow to set for 10 minutes and serve.