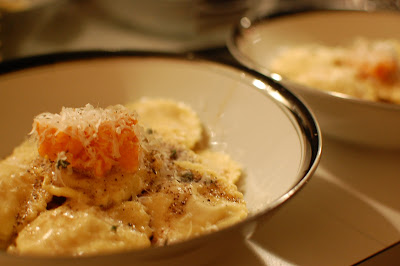 Sam and I had an ambitious Monday.  We’ve become very good at planning for the week and trying to get as much as possible out of one or two grocery runs–as much as I talked about “shopping like a Parisian”, it’s now pretty tiresome.  But on Monday, we didn’t feel like having anything we’d planned for, we felt like cooking outside of the pantry.  Sam’s love of making pasta hasn’t worn off and he was dying to try ravioli, so we decided on a sweet potato version. Luckily, my shopping run was minimal, and the whole process was actually a lot easier than I thought it would be!  Maybe that was because I didn’t actually have to hand make the pasta. But the filling was delicious and simple, that I would be tempted to try my hand at it the next time.  Paired with a simple butter sauce, and tinged with aromatic thyme, this meal was satisfying and special on a raw Monday night. 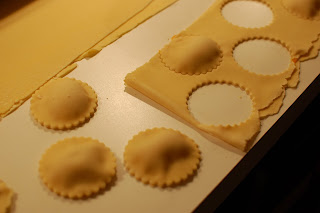 Homemade Ravioli Dough
3 eggs
2 ¼ c. flour
pinch of salt
In a large glass bowl, add the flour and create a well for the eggs.  Quickly whisk the eggs then pour them into the well.  Combine the flour and eggs and as soon as it starts sticking together, knead the dough until it is no longer sticky.
Wrap the ball in plastic and let it sit on the counter for 20-25 minutes.  Split the dough in half and roll each ball through the pasta maker on the widest setting at least 3 times.  Continue rolling the dough through at least 2 times at each successive setting until you get to your desired thickness. 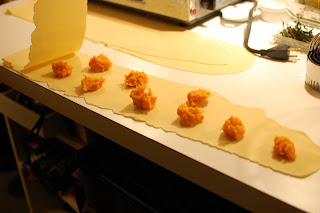 Sweet Potato Filling
2 medium sweet potatoes
2 tsp. fresh thyme
1 tbsp. butter
1 tbsp. milk
salt & pepper
¼ c. freshly grated parmesan
Peel and boil the sweet potatoes.  Alternatively, you can steam them in the microwave, which is a great idea when you only have two burners.  Once tender, chop the potatoes into manageable pieces and discard any tough or discolored parts.  Using a hand mixer, blend the potatoes until smooth.  Add the butter and milk and blend again.  Mix in the thyme, parmesan, salt & pepper using a spatula and taste.  Let cool for a bit before you dole out tbsp. sized filling for the ravioli.  Close and cut out the ravioli using a knife, or as I did, biscuit cutters.  They worked very well in sealing the ravioli.  When ready to eat, bring water to boil and cook the ravioli until all of it has risen. 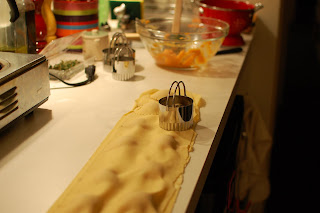 Butter Sauce
¼ c. butter
sprinkle of fresh thyme
salt & pepper
dash of fresh nutmeg
Melt the butter in a frying pan.  Add the thyme, salt & pepper, and nutmeg and stir until the butter just begins to froth and get brown.  Pour over the ravioli and serve with parmesan.
Posted by Erin at 10:56 PM