Carrot Soup for the Soul 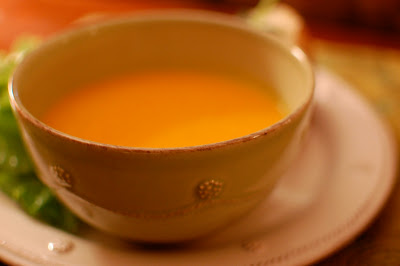 Here in Chapel Hill it has been HOT. Hot and muggy and not that pleasant. Until yesterday. It was gorgeous! Still warm, but the humidity was almost gone and I swear it felt like Spring.  If there weren't leaves starting to fall, I would have thought we skipped a few seasons.  But I guess that's just what life is like here in sunny CH.  Tough, huh?
That said, this recipe has really nothing to do with the weather, (and today it definitely feels like fall!) I just had a hankering for it.  I found my go-to carrot soup recipe one Easter when I decided I wanted to cook dinner for my family.  The only problem?  I was living in my tiny West Village apartment of hotplate fame.  I needed something that could be made ahead and didn't require too many ingredients (since I was already making an herb crusted leg of lamb in my toaster oven and there wasn't room for much in my mini fridge!). Carrot soup fit the bill and was a festive addition to my Easter table.
Now I turn to it often.  It may not seem like it, but it's an incredibly satisfying dish (even Sam only needs one big serving usually!) It's also a great, way to use up carrots if you found yourself buying a 5 lb. bag because it was on sale.
This time, I turned to the Food52 community for some additional inspiration and I'm so glad I did.  The recipe I found called for roasting the carrots instead of just boiling them in the stock.  I took the recipe one step further and decided to roast the onions as well. What resulted was a creamy (it almost tasted like I put heavy cream in it!), fragrant soup with a lot more depth than I would have thought.   Both of my carrot soup recipes called for ginger which I decided to keep here because it brings a subtle heat to what might otherwise be a bland soup.  I still like the boiled carrot version (and it's a quicker recipe if you're pressed for time) but in the fall, I recommend trying the roasted version.  Serve it as an appetizer or with a grilled gruyere cheese sandwich or even just a delicious baked potato (bonus, you can bake it at the same time as the vegetables!). Preheat the oven to 375. In a baking dish, spread out the carrots and onion and drizzle with olive oil and salt and pepper until lightly coated.  Roast the vegetables for 35 minutes until browned and softened. Heat the oil in a large soup pot over medium heat. Add the garlic and ginger and sauté until just fragrant. Add the carrots and onions, broth, and additional salt and pepper. Bring to a boil. Reduce heat and simmer for an additional 10 minutes. Turn off the heat and using an immersion blender, puree the soup until smooth. Reheat the soup and serve.
Posted by Erin at 5:48 PM